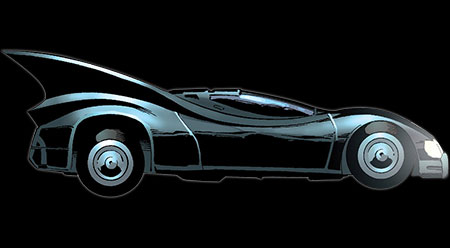 After the death of Damian at the hands of The Heretic, Bruce's grief drives him to a much darker, nastier place. The rest of the Bat Family attempts to intervene, including Batgirl in the story "The Bargain." She first encounters Batman clearing the docks of a drug shipment, then later after he's crashed this Batmobile through the front of a car dealership to stop some thieves from making off with several high-priced automobiles. In addition to being tough enough to shrug off a run through a building and into a Hummer H1, it is shown to have concealed launchers in the front fenders that can act at least somewhat autonomously to assist Batman. In a change from most Batmobiles (though fitting for the current events of the story), this one has only a single seat.