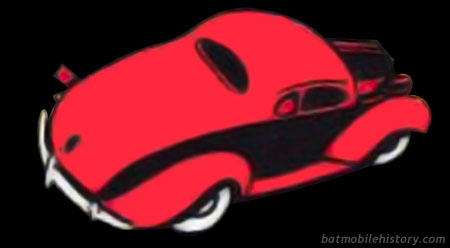 Although he has seen many variations over the years, many of Batman's trademarks were there right from the beginning: the black cowl, the winglike cape, the combination of cunning and brute strength, and—of course—his high-powered automobile. When we first see Batman behind the wheel in "The Case of the Chemical Syndicate," he is driving what appears to be an unmodified red coupe (that may very well may be the same car used by Bruce Wayne two pages earlier). The term "Batmobile" would not be coined until 1941, and any specific mention of modifications would not appear until following issues. But the seed had been planted, and it was a fitting start for his kind.