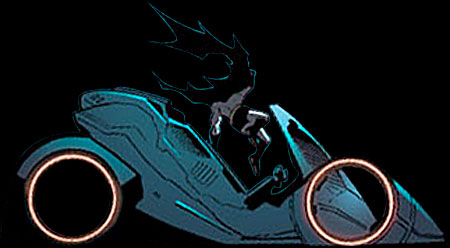 When Damian leaves Batman for Ducard in "Mutineer," Batman searches for him using a combination of high technology and traditional legwork. This Batmobile is used as transportation during his sweep of the city. It inegrates a Tumbler-inspired front wheel arrangement with light piping and hubless wheels inspired by the Tron: Legacy Light Cycles. Despite the smooth finish and lightweight appearance it is heavily armored, able to shrug off gunfire from automatic rifles as well as impacts with other cars. A small pair of fins appear on the top of of the forward-tilting canopy.

In issue #8, the Batmobile demonstrates a variable configuration that allows for flight capabilities. After engaging a set of lifting thrusters, it jettisons everything but the central fuselage and control surfaces. This makes it less of an "alternate mode" (as seen in Batman & Robin #1), and more of an emergency escape vehicle (like the Batmissile).