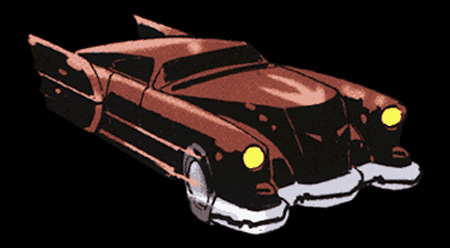 The "Elseworlds" series took existing comic characters and rewrote them in different settings and "what if..." situations. In Batman: Dark Allegiances, the story takes place in pre-World War II America, with Batman teaming up with Alfred and Catwoman to stop an assassination attempt on F.D.R.

The Batmobile used in this story features the bat-mask battering ram, oil slick dispensers, flame throwers, a passenger-side ejector seat, and hydraulic rear bumpers that enabled the car to leap over obstacles. Also featured in the story was a "rolling bat cave" designed into a private freight car. The side of the freight car could fold down and extend a ramp to allow the Batmobile on board while the train was moving.