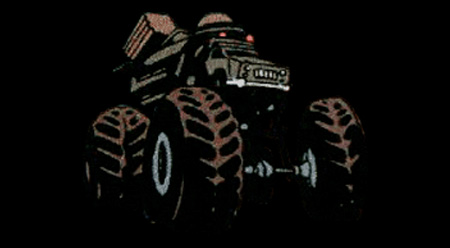 In The Cult, Batman faced a new enemy named Deacon Blackfire. As the Deacon created an army from Gotham City's homeless population, he was able to kidnap and brainwash Batman into joining his side. Tortured, starved, and drugged, Batman (with the help of Robin) eventually managed to flee Gotham City as the Deacon declared it his own kingdom. The duo returned a week later to retake Gotham, using this all-new Batmobile.

Borrowing elements from "The Dark Knight Returns," this Batmobile was a behemoth. Built as the ultimate urban assault vehicle, it had 15' diameter puncture-proof baloon tires, 4-wheel drive, heavy duty armor plating, radar, missiles, and 200 RPM tranquilizer-firing machine guns. The only traditional Batmobile features that were retained on this vehicle were a pair of small bat fins and the gunners dome, which was designed much like the domes on the Batmobiles of the 1950s.

This Batmobile made another appearance over a decade later, during the "Aftershock" part of the No Man's Land saga. The heavy-duty 4WD allowed Batman to move through Gotham in the weeks after the earthquake that destroyed much of the city.