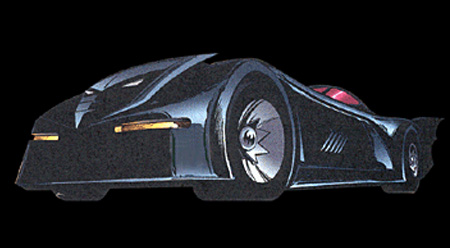 This variant of the Animated Batmobile appeared in Detective Comics "Made of Wood." While the basic design is unmistakable, the car has been rounded and stylized to reflect a more modern aesthetic, and a bat mask replaces the louvered grill.

One interesting note about the design of this Batmobile is that the inboard set of fins is below the deck line, more like the toy version of the Animated Series' car than the actual cartoon model. The cockpit has no fins, instead it has a round nacelle behind the rear window.