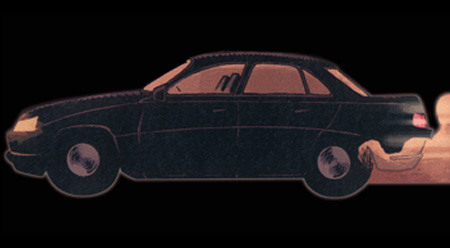 Batman & the Monster Men tells an early-career Batman story where he has his first encounter with super villians (created by Hugo Strange) and builds his first Batmobile. Before his dedicated car is complete, however, the "Batmobile" is a nondescript sedan made to blend in with traffic. Modifications to the car include gel-filled tires (to prevent flats), tinted bulletproof windows, plate steel lining the frame, a fully stocked emergency kit in the trunk, and a turbocharged engine that responds to short-range radio control. Fake license plates are swapped out to keep it "under the radar."

The car has a relatively short life, however, as it is damaged and taken into Police custody in issue #2. Alfred laments the loss of the "Night Car," but Batman dismisses it with a remark about what he's working on in the garage: "something new...something better."