Batman and the
Outsiders #8 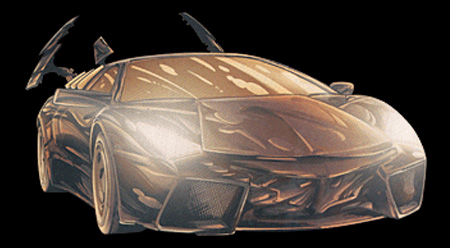 Despite being the title character, Batman's car didn't show up until issue #8 of Batman & the Outsiders. Even then, it was only as set dressing. It finally saw some limited action in the next issue, as Batman used it to transport Daan Sapp for a visit with Looker. It's design is a modified Lamborghini Reventon coupé. It features the standard Batmobile jet exhaust, an upgraded interior, a bat emblem on the nose, and a set of adjustable airfoils (the latter two items seem to be based on the designs from Batman Begins/The Dark Knight).