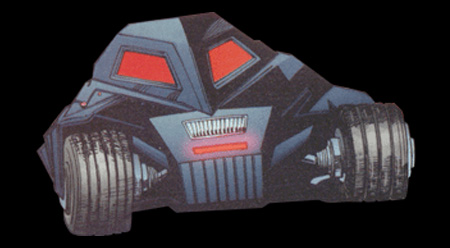 The second story arc of Batman: Confidential started with issue #7. In it, Batman was reflecting on his development as a crimefighter, and the success he had seen in ridding Gotham City of crime. As part of his flashback, the visuals included a pair of earlier Batmobiles, and narration about how he continued to develop the car until he was satisfied with it. The above car is the first of these two "flashback" Batmobiles, based loosely on the Tumbler from Batman Begins. Although it has the exposed front wheels, dual windshields, and overall angular appearance of the Tumbler, it has a more traditional front axle and a taller, narrower profile. The nose of the car is also quite different, with a grille and scanner in place of the Tumbler's lower viewport.

The second car appearing in the flashback was the bubble-dome variant that first appeared in The Killing Joke, and appears unmodified from that version.