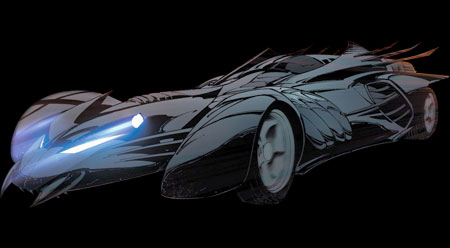 The multi-issue "Night of the Owls" storyline was the first major Batman crossover since the debut of The New 52. As the night's events unfold, Batman takes to the streets in this Batmobile. The design draws from several parts of Batman's history, including the Holy Terror and early Norm Breyfogle Batmobiles.

Although it technically made its first appearance in Detective Comics #9, drawn by Tony Daniel, he has confirmed that Greg Capullo actually created the design for Batman #9, which was released the following week. The events of Detective also happen between two panels of Batman, making both issues valid "first" appearances.

Other artists continued to use this design in later years, expanding its capabilities to include a holographic camouflage allowing it to appear as a nondescript sedan for undercover work, voice command recognition, self-contained firefighting equipment, an emergency medical suite, and a built-in motorcycle similar to the Batpod, but without requiring the destruction of the Batmobile to access it.

It was destroyed in the events of Batman Eternal, after GCPD Commissioner Jason Bard had Lucius Fox commandeer the car in an attempt to force Batman to surrender. Bard took remote control of the Batmobile and sent it crashing through multiple high-rise buildings, ultimately plunging from the last one to the ground several stories below. A special protocol installed by Alfred allowed Batman to escape the doomed car just before it hit the ground, though he claimed there were six other ways out of the car.

Even with it's apparent destruction, it would appear once again in Capullo's final issue working with writer Scott Snyder: Batman #51. The issue follows a rare quiet night in Gotham, with Batman able to take the Batmobile out without using its holographic camouflage (though he does flip through a couple of options, including a mid-'60s Chevrolet Fleetside and an early '70s Mercury).