Batman: The Man
Who Laughs 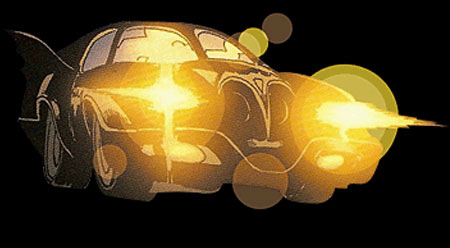 The Man Who Laughs picks up shortly after the events of Year One, with Batman and Captain Gordon facing off against a psychotic killer and the first of Batman's myriad foes: The Joker. During the time between Year One and The Man Who Laughs, Batman decided to create a vehicle for his crusade (instead of using his regular car to change from Bruce to the Dark Knight). To help maintain his low profile, the Batmobile had a conversion system to change from a regular car to the Batmobile.

Though it is unlike the "first" Batmobile used elsewhere in the Batman mythos (including the cars from "Prey" and Batman Begins), it does share several design cues from earlier cars such as the hood scoop & fenders from the Futura Batmobile.