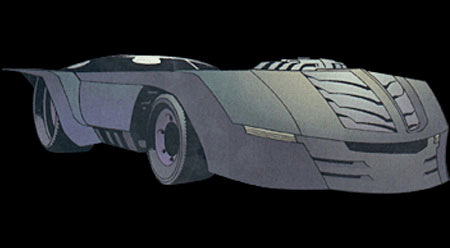 In the Epilogue to "The Resurrection of Ra's Al Ghul," Batman returns to Gotham to deal with his usual dregs. But Ra's has followed Batman, and confronts him after Batman subdues an antique map thief. The two exchange words, and Batman is forced to face off against the ninja army. He defeats them easily enough, but realizes that Ra's may have located the Batmobile. A car bomb confirms his suspicions, and he has to get home with a stolen suit and a taxi cab.

Back in the Batcave, three alternate Batmobiles are shown, including the one above (the only "full car" visible in the scene). This represents the nearly complete evolution of the design Dustin Nguyen started in the "As the Crow Flies" arc. The Batman: THe Animated Series influence is most clearly visible here, while still retaining Nguyen's trademark sports/muscle car proportions.