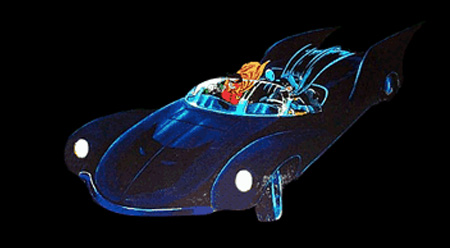 Batman recieved a design revamp in June 1964's Batman #164, and with the upgrade came a new Batmobile. Smaller, faster, and far sportier, the '64 Batmobile was the first two seat roadster, strongly influenced by the "C1" Corvette and Porsches of the time. Features were limited due to the size of the car, and the overall design was far simpler than it's predecessors.

The only features to be carried over directly from previous years were the Bat Signal/searchlight on the rear deck, and the curving bubble canopy (although this last feature was considerably shortened, appearing as little more than a curved windshield). The bat mask was changed from a weapon to a decoration, and moved up onto the hood of the car, and the large vertical roof fin was reconfigured into two smaller fender mounted fins for the first time in history.