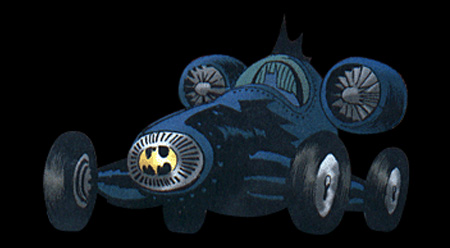 Gotham After Midnight follows Batman through a particularly rough night in Gotham City. After dealing with an escaped Scarecrow in the first issue, he heads back to the Bat Cave in this Batmobile. It is reminiscent of late-1950s Grand Prix racers with its narrow, cigar-shaped body, exposed wheels, open cockpit, and riveted body panels. Unlike those cars, however, it also has a pair of jet turbine engines mounted just behind the driver, a vertical fin, and a single powerful bat-shaped headlight in the nose.