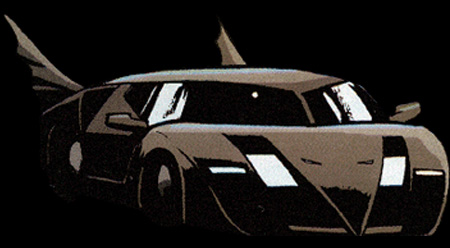 The 2006 mini-series Man-Bat focused on Kirk Langstrom, who feared his alter-ego Man-Bat may be resopnsible for a series of grisly murders. As he struggled with losing his humanity, Batman was on the case. After making a sudden breakthrough, he speeds out of the cave in this Batmobile, based on Ford's GT90 concept car. The only significant changes that have been made are a new roof panel (the concept car had a full "bubble" style canopy) and the traditional bat mask and fender fins. The mask is somewhat unique, as it has been fully integrated into the design of the car, and has only the eyes and pointed nose: the ears have been flattened into the rest of the bodywork.