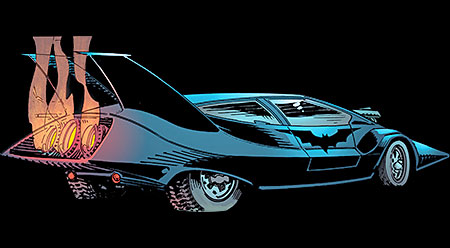 Section 8 (a play on the military designation for "mentally unfit for duty") first appeared in the pages of Garth Ennis and John McCrea's Hitman. Led by the perpetually intoxicated Sixpack out of a Gotham City neighborhood known as the Caudron, most of the original Section 8 was killed off and Sixpack needed to assemble a new team. These included Bueno Excellente (who "defeats evil with the power of perversion"), Baytor (Demon Lord of Criminal Insanity and caretaker of Noonan's Bar), Dogwelder II (who spot welds dead canines to evildoers), The Grapplah! (who is "an annoying tool who won't shut his stupid mouth"), Powertool (a construction-themed vigilante with a drill on his face), and Guts (a mass of internal organs arranged in a vaguely humanoid shape). Still one member short of the requisite eight, Sixpack tries to recruit from the Justice League without success.

His first attempt is made in All-Star Section 8 #1, when he stumbles out of Noonan's bar and sees this Batmobile parked by the curb. Artist John McCrea based the design on the Pink Panther show car, adding the rear fins and moving the driver's seat from the show car's extended nose to a more traditional midships position. Little is actually seen of the car, as Batman spends most of his time in the comic ignoring Sixpack before receiving a parking ticket and driving off.