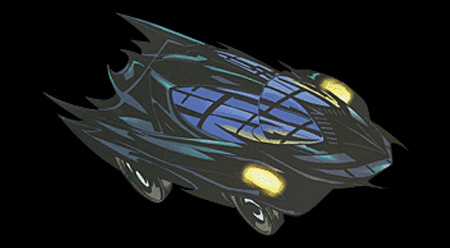 Batman races against the clock to save a kidnapped girl despite having been poisoned by the Joker, Penguin, and Two-Face in Batman: DOA. This Batmobile is used throughout the first half of the story as Batman & Robin investigate the crime. Drawn by Bob Hall, this Batmobile is a unique, almost pear- or egg-shaped car with gullwing doors and the usual bat mask and fins. Little is shown of the car beyond its incredible durability; the car broadsides a van at full speed, sending the van tumbling away but leaving the Batmobile unscathed. Hall has said that he created the design by intentionally eschewing existing Batmobile standards such as a long wheelbase, flat body, or contoured sides.