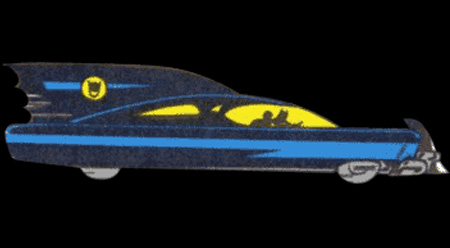 This Batmobile from 1952 shows some of the cosmetic changes the 1950 Batmobile went through before its next major revision. The roof fin lost the S-shaped leading edge, and became a simpler curve. The sides of the car occasionally sported rear fender blisters (similar to early '50s Studebakers or Chevrolets), and often had half or full fender skirts over the front wheels. Finally, the paint scheme was changed from black to blue, and for the first time ever the Batmobile sported a painted-on bat logo. Unlike later logos, which were modified versions of the bat signal, this logo was a stylized version of Batman's cowl.