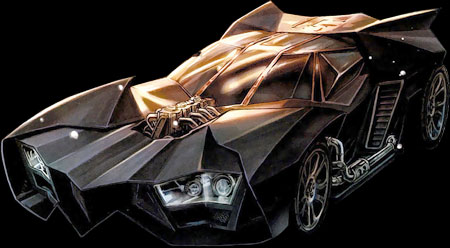 Batman: Noël was Lee Bermejo's spin on the classic Charles Dickens' novella A Christmas Carol as told through the Batman universe. Having already encountered the "Ghosts of Christmas Past & Present," the story sets up the final act by first showing then immediately destroying the above Batmobile.

The design was inspired by the Lamborghini Ankonian concept car, a fitting choice since the car was often referred to as "the next Batmobile" by several mainstream news outlets when it first appeared. Bermejo exaggerated the design somewhat, adding in extra panels and ports to take it from concept car to Batmobile.