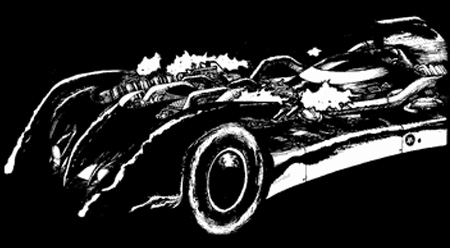 Batman: Black and White was a series of stories created in 1996. Conceptualized by DC editor Mark Chiarello, the idea was to collect the best writers and artists available to produce a collection of short stories drawn entirely in black & white. Naturally, such a product spawned more than one new Batmobile.

This is the third and final Batmobile to appear in the series, in the story "The Third Mask." It is the only new Batmobile in Black and White to be shown in action, as it transports Batman from home to the scene of a major explosion at the Gotham City Gas Utility.