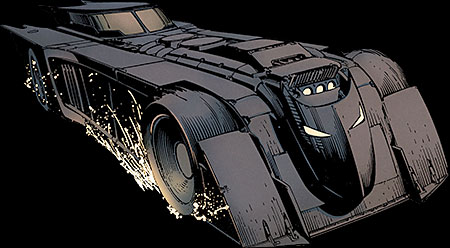 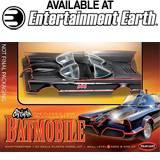 The "New 52" concluded its run in the summer of 2016, with the various Bat Titles either reverting to their original numbering (à la Detective Comics) or starting with a new issue #1. The kickoff to the "Rebirth" storyline in Batman #1 was "I Am Gotham." In it, Batman races to save a damaged airliner from crashing into downtown Gotham City. In order to intercept the doomed jet, Batman uses this Batmobile (with ground assistance from Alfred and Duke Thomas) to get from Police headquarters to Robinson Bridge in less than one minute. He then drives the car off the bridge while firing the ejector seat, putting him on the path to reach the aircraft and take control before it reaches the ground.

Its design is inspired by the Batman: The Animated Series Batmobile, with the square sides, flat fender tops, and the general shape of the cockpit/rear fins. But like more recent designs, this has layered armor plating and a distinct "bat mask" on the front. It also has exposed front tires, and is a much smaller car than the BTAS Batmobile, easily navigating through dense city streets and alleys. Other artists have since used it as the "standard" Batmobile.