Batman: Shadow
of the Bat #1 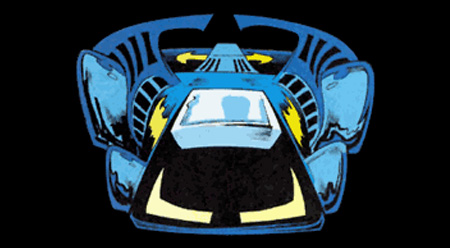 As the "spaceship" Batmobile was used through the early 1990s, it eventually evolved into a new car. The low, flat body became much larger and more aggressive, and the car developed a distinct wedge shape. The rear intake/exhaust housings had developed into large, sweeping structures, and the wheel housings became much more dramatic. This design is also commonly known as the "Breyfogle" car, after the artist who designed it, Norm Breyfogle.

Although more variations on this design would appear over the next couple of years, this is the car that was destroyed in 1995 during the fight on the bridge between Bruce Wayne and Jean Paul Valley for the role of Batman.