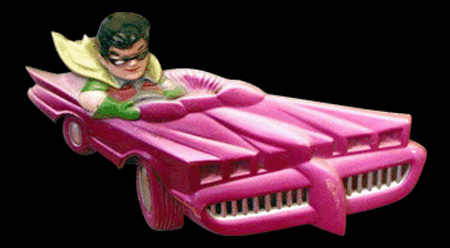 The Janex Corp. produced a number of talking alarm clocks in the mid-1970s (including Bugs Bunny, Howdy Doody, and Raggedy Ann & Andy), and among them was a Batman & Robin-themed clock. The clock featured Batman running alongside the Batmobile and the Gotham City skyline in the background, and played Batmobile sound effects and a conversation between Batman & Robin as the wake-up alarm.

Although the Batmobile used on the clock is likely supposed to be a rendering of the TV series' car, enough details are different to consider it a new car. Aside from the obvious color difference, this car appears to have four rectangular headlights set into the front of square-top fenders and a protruding grille division. Whether these changes were intentional (possibly to distance the car from its source material and avoid further licensing issues), or just a poor rendering is impossible to say, but the quality of other Janex clock figures points toward the first option being more likely.