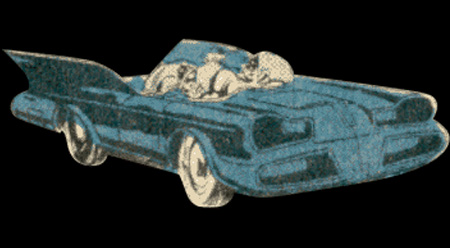 The Batman TV series had a metoric rise in popularity, and quickly made its way into every facet off the Batman universe. The comics were no exception, and the first Futura-inspired Batmobile made its appearance in January 1968's "Batgirl's Costume Cut-Ups!"

The transition was not exact, and a few artistic liberties were taken. Overall, the car was much simpler: the scalloped fin edges were now simple curves, and many of the hood & rear deck features were eliminated altogether. The complex red pinstriping and door bats were also dropped, opting for a monochromatic look. Finally, the nose was shorter and taller, making the comic car look more like toys based on the TV Batmobile than the actual TV car. The design did not last long, however, and after only four months it evolved again.