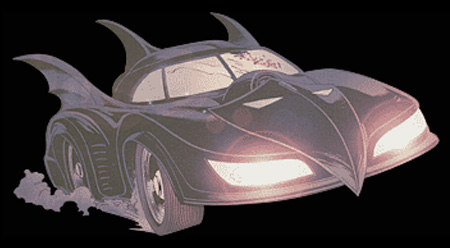 The first Batmobile of the post-"1 Year Later" universe appeared midway through the story arc "Face the Face." The design is a mix of several cars - rear fenders from the 1989 Batmobile, the three-fin design of the 1995, and a slant nose/air dam front end similar to the Porsche 935. The bat mask is in place on the front center, though the eyes are set very high on it and the ears are so downplayed they're almost nonexistant. Two issues later, the Batmobile appears in the cave without the front mask in place, though later in the same issue it returns. It has been used several times as the "standard" Batmobile since then.