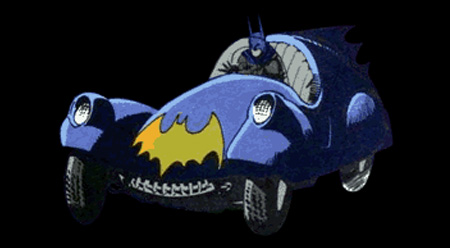 The "Elseworlds" series took existing comic characters and rewrote them in different settings and "what if..." situations. In Batman & Dracula: Red Rain, Dracula comes to Gotham to make it his personal empire, and Batman teams up with a band of "other" vampires to try to stop him. As part of the battle, Batman becomes a vampire himself, eventually losing or destroying all traces of his Bruce Wayne persona.

This car was used only briefly in Red Rain, as Batman developed a more personal mode of transportation as part of his new vampiric powers. The car is a single-seater, and seems to draw inspiration from early race cars (though it also has a passing resemblance to a Citroen). No real performance specifications were given for this Batmobile, though it is shown with three distinct exhaust ports.