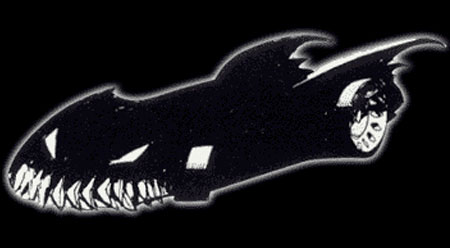 Batman: Black and White was a series of stories created in 1996. Conceptualized by DC editor Mark Chiarello, the idea was to collect the best writers and artists available to produce a collection of short stories drawn entirely in black & white. Naturally, such a product spawned more than one new Batmobile.

This is the second Batmobile to appear in the series, in the story "A Black and White World." In a semi-"fourth wall" story, Batman, the Joker, and the rest of the characters are actors playing their parts as heroes and villains. This Batmobile is waiting outside the studio after a take, though like the previous Batmobile, it acts as little more than set decoration.