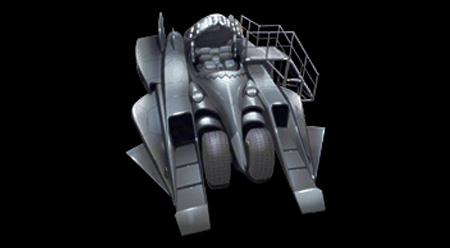 Batman: Gotham Knight served as a bridge between Batman Begins and The Dark Knight, as well as a stand-alone piece. It is actually a series of six short stories, each one created by a different team of writers and artists. Each team created a unique anime take on Batman and his world, including this Batmobile created for the story "Field Test." The design appears to be a combination of the Tumbler and an inverted F-14 fighter jet. It is shown to have remote driving capabilities, though other features and specifications aren't quite so clearly defined. For example, it appears to use both jet engines (as shown) and a reciprocating engine (as heard). Also, the size of the car varies wildly. In the above shot (shown in the lab where Lucius is giving Bruce a demonstration), the seat widths indicate that this Batmobile is approximately 21 feet across: far too large to fit on a standard roadway. Yet it seems to have no problem navigating city streets, bridges, and parking lots, indicating a much smaller vehicle.

A second Batmobile was shown in the story "Working Through Pain," when Alfred drives it to pick up an injured Batman. This Batmobile was drawn as the standard 1989 design. No other Batmobiles were used in Gotham Knight.