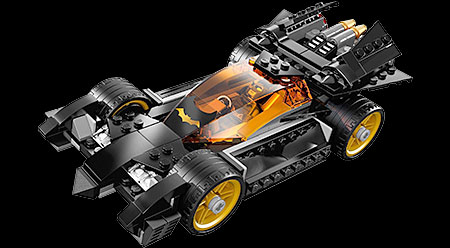 The third in the LEGO Batman franchise, Beyond Gotham saw another new ride for Batman. This one had a low, wide stance with a three-pronged nose and partially concealed jet intakes, very much like a LEGO-ized version of the Beware the Batman Batmobile. For armament, the entire rear portion of the car could elevate and expose a set of rocket launchers. As usual, an official kit was released (this time paired with Edward Nygma's dragster in set #76012 "Riddler Chase").