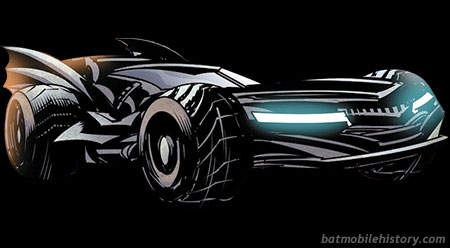 In their spin on Marvel's Old Man Logan, Old Lady Harley sets the action in a post-apocalyptic world where Atlantis is the newest state to join the union and Canadians are now known as the "Living Challenged" under the leadership of Prime Minister Zombie Wayne Gretsky.

When Harley discovers that Joker might not be dead after all, she heads back to Gotham to find the truth. There she finds Bruce Wayne has merged with the Bat-Computer and now rules a completely crime-free city patrolled by Batman and Azrael automatons. A few bits of old tech remain, though, including this Batmobile. One of the Bat Bots uses it to bring Harley and Red Tool to the Arkham Home for Criminally Insane Retirees where they can meet with Catwoman.

The design borrows a bit from the Batman v. Superman Batmobile, including large balloon tires at the four corners, complex side panels with high-mounted intakes, and a wide, flat front. The canopy is a more traditional single piece with a bat-shaped window.