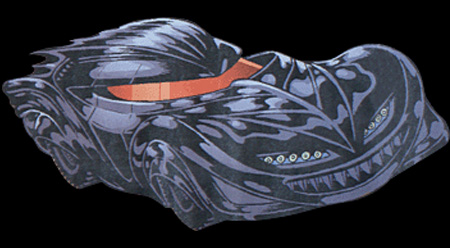 For the first few installments of "The Cat and the Bat," the story focused entirely on Batgirl and Catwoman. Batman arrives at the end of issue #19, and this Batmobile makes an appearance in the beginning of the next issue. It only appears for a few panels, as Batman and Batgirl use it while following a tracking signal. Catwoman would've gone with them as well, but as Batman explains, "I only brought the two-seater."

Artist Kevin Maguire has stated that there were a couple of coloring mistakes in this issue with regards to the Batmobile. First, while the image used on this page was colored correctly, a later panel in the same comic had the windows and a section of the roof swapped - making it look like the windows were located much higher than intended. Second, his vision was that the "headlights" were actually an array of infrared emitters, and that the car would read reflections from these emitters to provide a real-time display of the outside world and allow the car to travel under total blackout conditions. The visible light beams were an unintended addition by colorist I.L.L. (this error would be repeated by the artist who created the CarInsurance.org infographic in early 2011).