Legends of the
Dark Knight #198 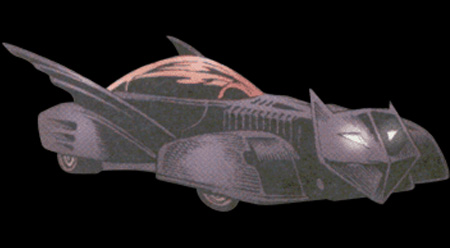 Source material and merchandising can be a two-way street. Typically, toys are based on comics, TV shows, and movies, but sometimes things work the other way around and comics will pick up designs used in then-current toy lines. This first occurance appeared in 1968 in the aftereffects of the television series, then again in 1985 with a Superpowers-inspired Batmobile. In "Blaze of Glory," the Batmobile toy first produced by Corgi in 2004 made an appearance as Batman's primary mode of transportation.

When Corgi made their replica, based on the 2003 "Hush" Batmobile, they took some liberties with the design. This was, in turn, directly used as the model for this car. Accurate down to the smallest body detail, the only place this car diverged from the Corgi car was the interior, which sported a modified version of the aircraft-stle cockpit.