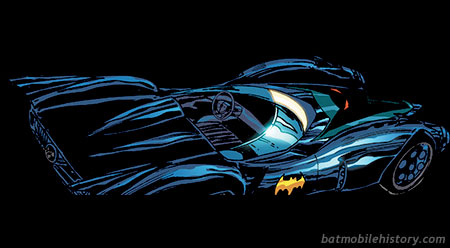 The Mach 5 from Speed Racer has often been used by fans as a base for custom Batmobiles, both big and small. Jorge Lucas finally made it an official Batmobile in "Interlude: A Bird in the Hand," a stand-alone story that follows Batman, Incorporated members Jiro and Crazy Shy Lolita Canary as they battle Lady Tiger Fist and Teen Tiger Team. After triangulating the location of the Tigers' base, Jiro and Canary arrive at what appears to be a dead end in this Batmobile (provided by Batman for field use in Japan). Canary's sonic sceram is suffiicient to destroy the illusion, however, and the duo easily take down the baddies.