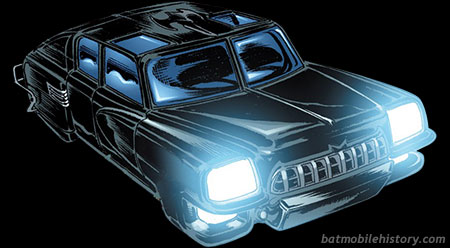 The "Elseworlds" series took existing comic characters and rewrote them in different settings and "what if..." situations. Planetary/JLA reimagines the former group as antagonists, using their discoveries and advances to take over the world. Bruce, Clark, and Diana remain the only survivors of the Justice League, and after years of detective work are ready to bring the fight to Planetary.

The first leg of their journey takes place in this Batmobile, which was specifically designed and built to be as stealthy as possible. Visually it appears nearly identical to any other sedan on the road (save for the subtle Bat symbols on the roof and grille surround), and electronically it emits flase readings to throw off Planetary's scanners. It also harkens back to some of the earliest Batmobiles, with its large sweeping fenders, bubble canopy (here broken into smaller square panes in the roof and sides), and a large cargo area in the rear to function as a mobile Batcave.