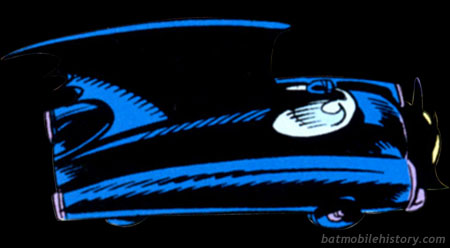 Batman: Two Face Strikes Twice was a two-part series that featured two stories by two creative teams drawn in the styles of two distinct time periods (they had a theme going on here). The first of these stories, "The Two Faces of Janus," was drawn in a "Golden Age" style and was an early clash between Two Face and the Dynamic Duo.

As part of that Golden Age look, Joe Staton combined the styles of Dick Sprang and Sheldon Moldoff. Staton's design has a much larger, more exaggerated fin that either of those designs, with a small bubble dome and short hood at the front of a long, tapered body.