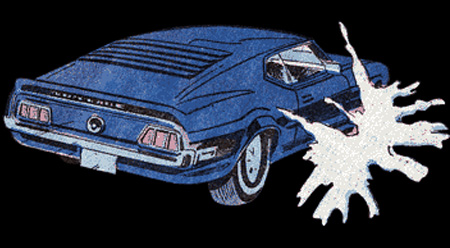 The Dark Knight reused the "dealer stock" look in Batman #247 when this Ford Mustang served as transportation. Like the 1972 Corvette used in the previous issue, this Batmobile is drawn as an almost perfect rendition of a factory-stock automobile.

Batman himself is fairly ineffective in this story. First, he's run off the road into a snowbank. Next, he's knocked unconscious when he gets out to fight off the men who ran him off the road. Then, as a final insult, the bad guys leave their truck behind and steal the Batmobile. Batman triumphs in the end as usual, but the days of unmodified Batmobiles are over, as more custom vehicles return to Batman's garage.