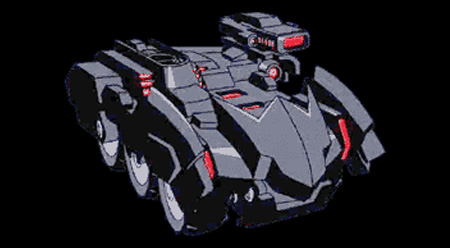 The Batman's season 4 episode "Artifacts" took place entirely in the future. The primary story was set in the year 3027, with a resurrected Mr. Freeze destroying the new Gotham City. Desperate for a way to stop him, a team of archaeologists is sent to locate the Bat Cave and find any information left by Batman that could help them. The story the switches to a flashback of the year 2027, when a 50-year-old Batman makes what he thought would be a last stand against Freeze.

When we're first introduced to this Batman, he's traveling to the crime scene in this Batmobile. Heavily influenced by the Dark Knight Returns tank, it features six-wheel drive, heavy armor plating, a guided missile launcher, and remote control capabilities. Power comes from the standard "blue flame" jet engine used in both versions of the Batmobile used in the series, although the engine in this one is substantially larger. It plays an important role in the battle sequences, and although it is damaged during the fight it is not permanently destroyed. In fact, it was one of the artifacts found in the far future, still pristine after nearly a millennium of neglect.