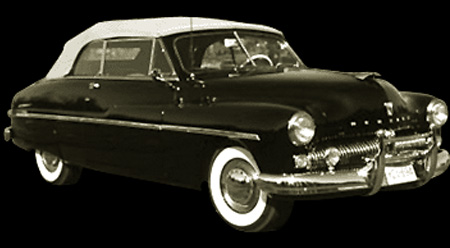 Batman returned to live action for his second (and final) serial run in 1949. Though it lacked any significant budget, most elements of the Batman universe were retained: the costumes, Wayne Manor, the Batcave, and a "Batmobile."

The Batmobile used for this serial was a factory-stock maroon 1949 Mercury Convertible. Like in the 1943 serial, the same car also happened to be Bruce Wayne's regular transportation; the only difference was that the top was put up when it was in use as the Batmobile. Accoring to Johnny Duncan, the actor who played Robin in the serial, they actually went through six cars during filming. Though powerful, the Mercury was a very heavy car that didn't corner all that well...so whenever they wrecked one, they would just swap cars and continue shooting.