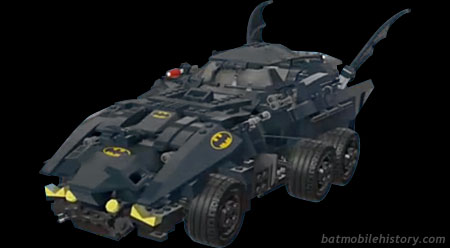 Having been in multiple releases already, it was no surprise that Batman turned out to be one of the Master Builders in The LEGO Movie. As a Master Builder, he had the ability to make up new designs on the fly, which he used to reconfigure his Batwing into the above Batmobile during an escape from Bad Cop and the Robot SWAT. It was destroyed shortly after during the Robot SWAT's attack on the Master Builder's meeting.

Strangely, no official set of this Batmobile exists, and LEGO has made no announcement of a planned future set.