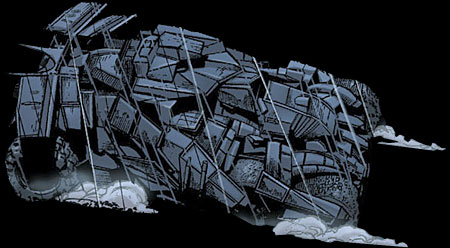 In the opening sequence of the story "King for a Day," Ignatius Ogilvy pulled a brazen heist on the Gotham First Federal bank and issued a challenge to Batman. Batman accepted, and showed up at Ogilvy's front door (the former home of Oswald Cobblepot) in this Batmobile. It is then used again in "Targeting the Shield," when Batman used it for both patrol and interception while tracking a cop killer in Gotham.

The overall design is very similar to the Begins/TDK Batmobile (even being referred to as "the Tumbler"), but with several modifications such as a third axle, an enclosed area between the front wheels, and a more heavily armored cockpit area. In many ways it resembles some of the Tumbler's early concepts, before the front axle arrangement had been finalized.