Legends of the
Dark Knight #208 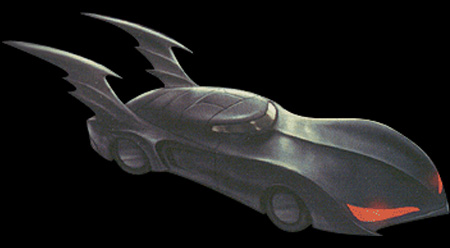 The Legends of the Dark Knight story "Darker than Death" had Batman dealing with a very personal case, and as such most of his time was spent on face-to-face encounters. That did not prevent the appearance of a new Batmobile, however. Seen only in one panel, this Batmobile seems more "traditional" than other Batmobiles of late - rather than exposed engine components or over-the-top design elements, it has relatively simple body lines, a simple pair of fins, and a coat of black paint. According to artist Ariel Olivetti, the design was not based on any specific design (Batmobile or otherwise), he just wanted to create a sleek, beautiful look that fit with the rest of the story.