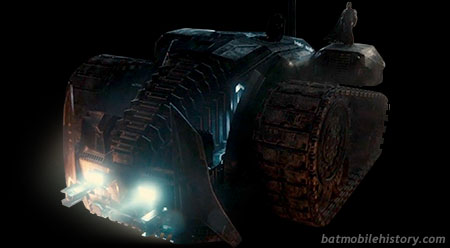 Among the many revisions made to Justice League to create the "Snyder Cut" was a series of epilogue scenes showing what the members were doing after the battle in Russia. One of these was Commissioner Gordon lighting the Bat Signal, which then transitioned to a shot of Batman standing on his new Batmobile. This was one of several callbacks to earlier Batman stories, in this case The Dark Knight Returns with its massive tanklike Batmobile. The design is a very faithful adaptation of Miller's art, from an overall massive size to its articulated neck to the twin primary cannons.