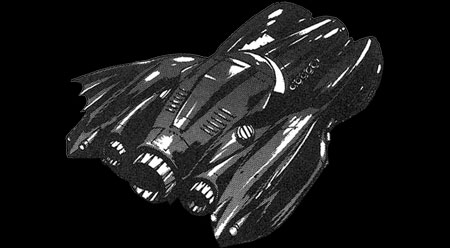 Written in 2000 by Kia Asamiya, Child of Dreams takes Batman to Tokyo on the trail of a new drug that is allowing people to live out their fantasies as any one of Batman's villans. It was then released by DC Comics in the American market in 2003. The Batmobile used in the story was strongly influenced by 1989's Batmobile, though it is clearly not the same car.

The overall theme of this car seems to be a "more intense" version of the 1989 Batmobile. Instead of a single jet nozzle on the rear of the car, this one has three. Instead of the traditional four wheels, this car has six. Though its roots are obvious, everything is larger and more elaborate.