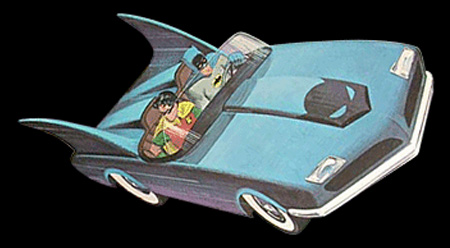 Also released during the 1966 TV series media blitz were a series of Batman-themed coloring and activity books. Although most of these simply used imagery from the comics or show, some new ideas came out as well. One of those ideas was this Batmobile. It combines elements of the earlier comic book and live action cars, resulting in a car that has a passing resemblance to the Pontiac Firebirds that would come out over two decades later.