Batman: The Brave
and the Bold 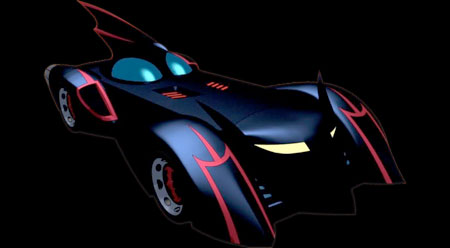 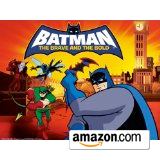 The Batman finished its run in March of 2008, but Batman wouldn't be off the air for long. The premiere of Batman: The Brave and the Bold aired on November 14 on Cartoon Network. This series was a lighter take on the character, and featured a different team-up in each episode. It also included a new Batmobile.

This Batmobile evokes several classic designs, such as the "double bubble" canopy and black with red pinstriping of the '66 Batmobile and the single roof fin and fat fenders of the 1940s Batmobile. The arrangement of the cockpits and overall body shape are also similar to the design created by Mattel in 2004. This Batmobile also has the ability to morp into other vehicles for Batman to use, including the Batplane and the Batsub.

Batman: The Brave and the Bold aired for three seasons, and DC produced two comic books based on the series. The last of these finished its run in April of 2012 in preparation for the next animated Batman series, Beware the Batman.