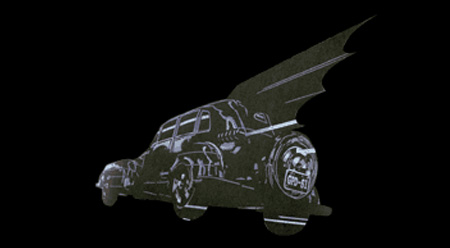 The "Elseworlds" series took existing comic characters and rewrote them in different settings and "what if..." situations. In Superman & Batman: Generations 2, heroes of the DC universe are all assembled to face various challenges through a continuous story arc from 1942 to 2019. What makes this story unique is that the characters age normally; able to live, get married, grow old, and die in a feature outside of the regular continuity.

First appearing in the 1942 story, this Batmobile is only loosely based on the "regular" Batmobiles of the era. Its role is fairly brief, though it is shown to have blackout lights and remote control capabilities. Though it crashes shortly after its introduction, the car is seen in later stories, apparently safe after its introductory role.