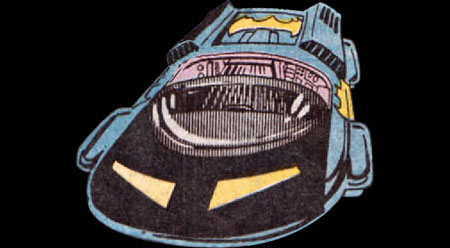 Although the "Keaton" car was the most easily recognized Batmobile at the time, the comics used a low, flat car reminiscent of land speed record cars starting with Detective Comics "Tulpa" in June 1989. It had an integrated canopy and sleek lines, with large intake/exhaust housings above the deckline over the rear wheels. The most unique feature of the car, however, is that the wheels were enclosed not within the body, but in shells placed outside the main fuselage like outriggers.

This Batmobile was not only futurstic in appearance, it was also one of the most technologically advanced. It featured an integrated computer, sophisticated communications array, a jet turbine engine that could out-accellerate the fastest supercars cars of time, and a combination parachute/airbag system that could stop it just as quickly.

This design was quickly adopted by other artists, who often provided their own take on it until its ultimate retirement in 1995 at the end of "KnightsEnd."