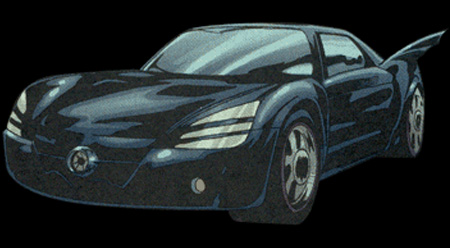 The follow-up to the massive 2004 crossover "War Games" began with Batman interrogating Alex Kosov, then staking out a meeting to which the Black Mask never shows. He heads back to the Batcave, and once there we see a long shot of the cave with this Batmobile in the foreground. The car is a sporty yet relatively understated sports coupe, based on the Opel Speedster (with the appropriate bat-modifications). The car reappears several times throughout "War Crimes" story arc, though only as basic transportation or as a background element.