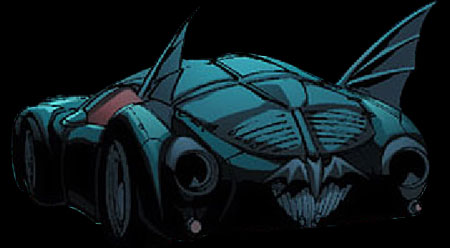 The first appearance of a Batmobile in Batman: The Dark Knight comes near the end of issue #3, after Batman has returned to the cave. As with Greg Capullo's art, this Batmobile appears as set dressing only. It appears to be a compact sports coupe with dual jet thrusters and an armored body. A similar Batmobile sits next to this one on the turntable, though it is mostly hidden and so details are impossible to make out.