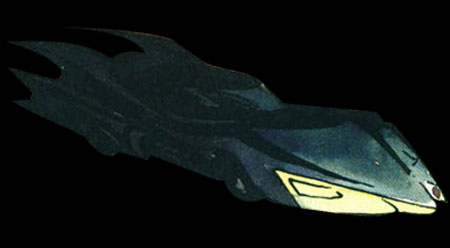 In 1992's Run, Riddler, Run, the Riddler is hired as a security consultant for a business developer. Events spiral out of control, with one member of the security force dead and Batman accused of his murder. This is the Batmobile used in the story, seen primarily in the second book of the series.

Although he had considered other ideas, artist Mark Badger ended up going with a design that followed the general standards of the time: a low and aerodynamic body, dual fins, jet exhaust, side intakes, and wraparound cockpit glass. It also featured a built-in phone, gullwing-style hatches, armor plating, smoke emitters, and special countermeasures that launch Batman-shaped kites that become shrapnel bombs when attacked.